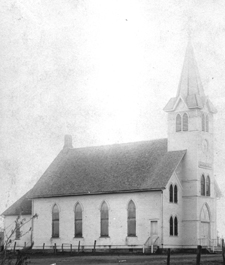 St. Paul’s Lutheran Church has served the spirtual needs for Lutheran families since 1880. The church was organized that year by twelve Lutherans who had moved to Reno County to homestead and live and was originally served by a missionary by the name of Rev. Gerhard Toenjes, who resided in Ellinwood, KS. Through him it was discovered that several Lutheran faimilies lived in what is now called Inman, KS. In the spring of 1880 these two groups of Lutherans united to apply to the Missouri Synod of the Lutheran Church for a full time pastor. Shortly thereafter, Rev. August Rehwaldt was assigned as St. Paul’s first pastor.

Although St. Paul’s had been organized as a congregation and had called it’s first pastor, it was still without a building and so worship was held in a public school. However, in 1880 ten acres of land were purchased, and on May 4, 1890, a resolution was passed to build a church building. In November of that year the new church building was dedicated, and shorlty thereafter in September of 1881 a charter was granted. The congregaton was received into membership of the Evangelical Lutheran Synod of Missouri, Ohio, and other States at the Convention of the Kansas District at Bremen (Hermansberg), Kansas, August 26-31, 1891.

The first parsonage was then erected in 1884. The present parsonage was erected in 1913, and a twenty foot addition enlarging the church was dedicated in 1914. In the fall of 1922 our current pipe organ was purchased. The church was then renovated for its fiftieth anniversary. However, in 1945 a building fund was inaugurated with hopes of building a new church. It was then in 1952 that these hopes were put into action as the old church was dismantled and a groundbreaking ceremony was held to lay the cornerstone for the new stone structure. In one year the beautiful structure was complete and the dedication of the new church building was held on April 26, 1953. Following in 1961 an additional two acres of land were purchased and in 1975 several renovations were made to the existing structure. In 2005 the church joyfully celebrated 125 years of dedicated service to our Lord.